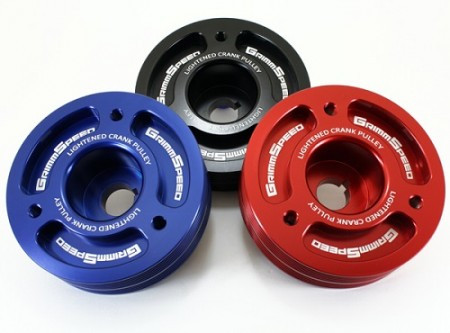 In our opinion, the OEM Subaru crank pulley has been a cause for concern ever since its original design. It is relatively heavy, susceptible to catastrophic failure, and quite unsightly. Continuing to use this on our cars just wouldn't do. Eliminating rotational mass while maintaining a safe presence can increase reliability and bring faster Rev's! For our Lightweight Crank Pulley we pulled out all of the stops. CNC machined from 6061 T6 Aluminum our pulley makes no compromise. It weighs in at 3.5lbs lighter than OEM while at the same time increasing its durability. Marked with a timing mark and perfect cut keyway makes this install a breeze. We designed the pulley with the optimum weight for performance while avoiding misfire CEL's and engine hesitation.

Achieving balance between performance and design while not sacrificing either, it's what you can expect from GrimmSpeed™

Important:Based on our analysis, the OEM crank pulley does not act as a harmonic damper found on for example traditional V8 engine dampers. The elastomer portion of the pulley helps dampen some noise from the engine accessories (ie. alternator, PS pump, and A/C compressor) but in our experience, the increase in this noise is in-perceivable.

Gates OEM A/C Belts - This is a replacement A/C Belt for your vehicle.

GrimmSpeed Pulley Removal/Install Tool - This unique tool allows you to hold the pulley in place while you are trying to loosen/tighten the center crankshaft bolt. Another great feature is that it will work with both OEM Pulleys AND the GrimmSpeed Pulley. This is truly a first of its kind tool that is great to have in your toolbox.