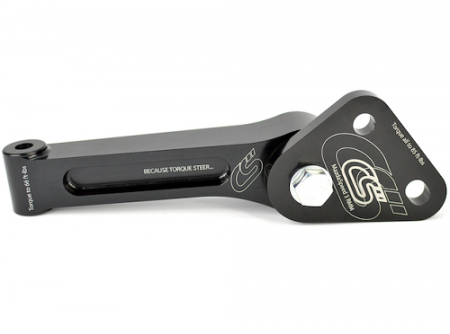 The CorkSport Stage 2 Rear Motor Mount is the latest and greatest design for the car enthusiast.The "think-outside-the-box" design takes a new look at the RMM design for a no-compromise goal of style, performance, and refinement. The CorkSport RMM significantly reduces wheel hop, torque steer, and improves throttle response by securely controlling your engine’s movement. The design achieves this with a minimal increase in engine noise, vibration and harshness (NVH); seriously it’s impressive how smooth the CorkSport Stage 2 RMM is and our beta tester agrees. Check out the video below to see the CorkSport Stage 2 RMM in action and get all the details below.

The RMM primarily controls the engine's rotational forces in the engine bay. These forces are a result of acceleration and deceleration via engine braking. With the OEM RMM the engine is allow to move/rotate significantly before force is finally applied to the tires; this is the major cause of wheel hop, torque steer, and poor throttle response.

The CorkSport Stage 2 RMM uses 6061-T6 aluminum for the "I-Beam" style brace bar and the ½" thick mounting plate for its high strength to weight ratio. These beautiful CNC machined parts are then anodized for a long lasting finish.

The RMM performance is locked down with 95A polyurethane bushings, zinc-plated steel sleeve, stainless steel bushing washer, and the necessary hardware.