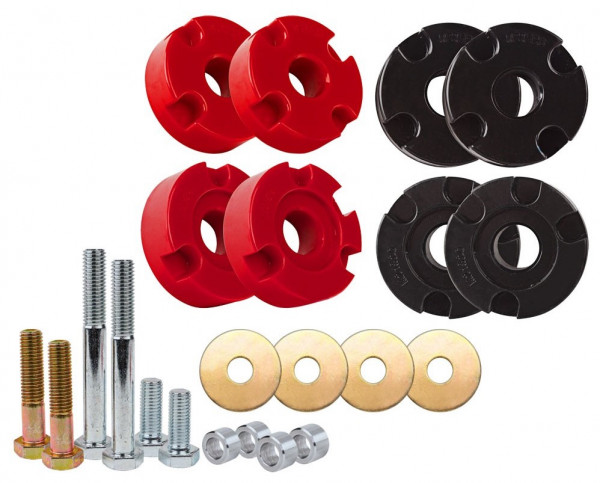 Steeda Autosports has once again taken the S550 Mustang to the next level of performance and comfort with our exclusive S550 Mustang Differential Bushing Insert System - Street to Full Race Combo Kit EcoBoost! This combo kit comes complete with our Urethane and Aluminum Differential Bushing Insert Systems. When our engineers sat down to design these kits, we had to come up with a way to increase performance without sacrificing an ounce of drivability using urethane bushings. Our engineers then also took our hardcore racers into mind when designing our kit which utilizes aluminum bushings.

Unlike our competitors' kits that will absolutely increase NVH (noise, vibration, harshness), take 3-4 hours to install and force you to permanently modify the rear IRS suspension with a sawzall, Steeda's does not! Our kit installs in under 1 hour, adds little to no increase in NVH, is adjustable and can be easily removed - it simply doesn't get any better than this!

Our urethane bushing inserts are made to Steeda's exact specifications and durometers, our kit comes with 3 different bushing options - our red 'street' 80 durometer bushings, our black 'performance' 90 durometer bushings, and our in-house billet 6061 aluminum bushings 'race'. Both urethane bushing options will increase performance with no increase in NVH, a Steeda-exclusive. Steeda's race kit installs in under 1 hour, is adjustable and can be easily removed. Since NVH was not an issue when designing the aluminum inserts, our engineers aimed to maximize reduction in wheel hop and differential deflection.

Steeda's kit adds the strength and support the OEM bushings need to perform the way our customers intended. Once again, this is not a permanent modification - there is no drilling, cutting or pressing required. Simply loosen and remove a couple bolts and this kit installs in less than 1 hour. Bushings are included for both the front and rear differential mounting locations. Grade 10.9 hardware is included with zinc-plated washers.